The 6th Ward Athletic Club was founded in Oneonta in 1959. The 17 founding Club members were all advocates of fast-pitch, windmill softball. Over the years, 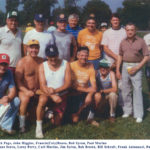 the Club has grown to over 500 members, with greater diversity of interest among its membership. Despite the Association’s incredible growth, the Club’s mission has never wavered; “to support sport, recreational and educational causes throughout Greater Oneonta Area.” The 6th Ward Athletic Club has been known for it generosity, contributing tens of thousands of dollars every year to worthy community causes. The Club’s headquarters, restaurant and bar are located at 22 West Broadway here in Oneonta.

Wagon Wheel ReunionIn August of 1959, the idea of forming an organization rose to a new level of importance; subsequent to the City Recreation softball play-offs that year between teamssponsored by the Wagon Wheel Restaurant and the 6th Ward Boosters’ Club. After the final game that season, there was so much frustration that it was decided to have a post game meeting to discuss organizing a Club. Members from both teams participated to include Cooty, Sonny, Bobby and Joe Russo, Bruno Scavo, Fred Delello, Frank and Al Colone, John Higgins, John Minarcin, Rich Myers, Chuck Gladd, John Colazzo, and any number of others from the rosters of the two teams. There were around 15 in attendance. It was decided to form the 6th Ward Athletic Club to work towards developing a lighted fast-pitch softball field and an accompanying league. 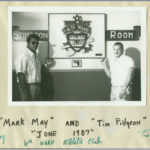 The group quickly realized that it needed some level of formal status and if its dreams were to be realized, the group needed to raise a significant amount of money. A core group met on a pretty regular basis to plan a strategy for the future; Joe Farro was elected the Club’s first president. A checkbook was established with Cooty Russo as treasurer and a number of fund raising initiatives were implemented that included raffles, 50-50 drawings, antique car shows, promoted multiple appearances of fast-pitch softball exhibitions with the great softball barnstormer, Eddie Feigner’s “King and His Court” and the “Queen and Her Maids,” an event food concession service, tent rentals and youth dances on the tennis courts on the 6th Ward Boosters’ Club Playground. 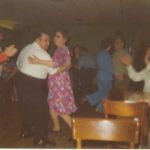 Youth dances became a viable revenue center for the fledgling group and were regularly programmed for several years; outdoors on the tennis courts with records and eventually, with live bands both on the tennis courts and indoors at the NYS Armory. The events were all well promoted, very well attended and staffed with members of the Club. Most concession items were either donated [soft drinks through LaMonica Beverages] or provided by other suppliers at cost.

As a result of the group’s high level of activity, the 6th Ward Athletic Club became increasingly well known and respected in the community; the group’s community image was very strong. In 1966, Frank Colone with input from other Club members fashioned the Club’s formal bylaws and subsequently that year, the Club’s attorney, Al Farone, processed legal standing of the organization through NY State Department of State.

It took a long time, with strong commitment and focus by members, to eventually produce a significant enough treasury to fund development of the lighted softball field. The 6th Ward Boosters’ Club pledged land for the field adjacent to the Oneonta Little League Field and in 1970, the state of the art lighted field was completed. It served as a venue for top quality fast-pitch softball for several years.

Also, in 1970, the Club took some of its assets and purchased the old River Street Elementary School that had become obsolete in the neighborhood with the opening of the brand new Riverside School at the intersection of Wilcox Avenue and Henry Street. Members of the Club stepped-up and volunteered time and money to make a couple of rooms in the old school the Club’s headquarters. They improved electrical services, dropped ceilings, painted and paneled walls and brought in furnishings. It served as the Club’s headquarters until 1976 when the old school property was sold to a local developer, later leading to the construction of “Oak Square Apartments.” By 1976, Club membership had grown to 49 regular members and three honorary members to include Frank “Diz” LaMonica, Mary DeFiori and Tom Marino.

Joe and MaryIn 1979, Club members decided to purchase Joe and Mary’s Restaurant at 22 West Broadway in Oneonta from the family of the late Joe and Mary DeFiori; which continues to serve as the Association’s headquarters and restaurant/bar. With the advent of the restaurant/bar operation, Association membership grew exponentially.

In the spring of 1981, the Association’s restaurant/bar became one of the primary venues in hosting a testimonial weekend for native son, Pitt Football All American and Mark May1980 Outland Trophy winner, Mark May. It was a tribute of the highest order, and the dinner program organized at the Club proved to be “the talk of the town.” Many believe that singular event transformed the AC from its formative years to a contemporary, meaningful and highly respected community organization. While, the Club at that time, due to membership diversity phased out of directly promoting Ani Colone Food Drivecommunity sports programs, instead began to support with funding worthy area causes and organizations that fulfilled the same community-wide objectives towards health, recreation, sport and education targeted mostly to youth. Today’s Association contributes tens of thousands of dollars every year in community support, offers multiple high school scholarships and conducts it’s own highly successful food drive; the Ani Colone Food Drive.

Since the early 80’s, the Association has established any number of social events for both members and the general public throughout each year ranging from golf tournaments, dinner-dances, clambakes, bus trips and more. In 2012, Associations first members reunion weekend will be promoted featuring the “Joe and Mary’s Banquet” in honor of Joe and Mary DeFiori. 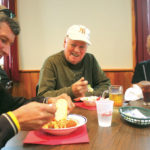 lunch day coordinated by Bob “the Bear” Bryant, staffed by Club volunteers to include John Chicorelli, as “Top Sauce” Chef.

The Club’s restaurant/bar features a banquet hall, which serves to host both Club and outside events to include self promoted  Annual Golf Tournament year round holiday dances, clambakes, St Patrick’s Day Dinner and other theme parties, along with wedding receptions and other social gatherings. The banquet hall has an adjoining outdoor deck that is often used to site barbecue type events. There are many club activities scheduled throughout the year ranging from golf tournaments and bus trips to regional sporting events.